Fair-weather Island as it is known title consisted of seven acres of land. The year 1807 brought about a real change. Our federal government then purchased 9 and 1/2 acres of the island from a Daniel-Fair-weather establishing the Light station.

The very first Lighthouse known as The Black harbor Light was built by Arisa Woodward. This went full operation by 1808.Years later this Lighthouse was destroyed by a ravaging storm in 1821.  BY 1823 a new tower replaced the damaged property .This was in operation until 1933.This then was duly replaced by two offshore Lights. The Lighthouse adds itself to Bridgeport’s Seaside Park as a historic district attraction.

This unique Lighthouse was given over to Bridgeport in 1934 and duly became part of what’s known as Seaside Park.  But over the years vandals had destroyed some of the internal structure.  Also in 1977 the keepers building was destroyed by fire. The tower was restored later in 1983.This moved the Lighthouse to become a nature preserve.

Over the years a number of keepers looked after the Lighthouse. The last keeper was Charles H. Gilmore.  He was on duty from 1933-1952.  Throughout the years many keepers kept the tower in operations.

Throughout the years many renovations took place so as to preserve the ancient Lighthouse.  Even though not in use now it stands today as a symbolic tribute to the cities’ history.  Bridgeport’s Black Rock harbor was a trade center in the earlier times and today is truly a landmark many years later. 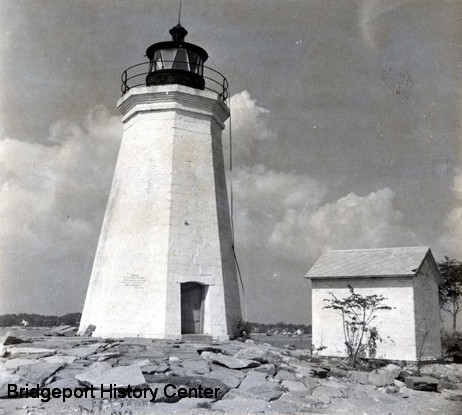 Richard Sattanni
Richard Sattanni has been a writer for over nine years. He did an editorial column entitled “Remember When” for the “Bridgeport News” and a column for “The Fairfield Independent. “ He has published two books with Americastarbooks.com and recently was published by “The Senior Newsletter” of Bridgeport. He has posted numerous stories on Figment.com that readers can enjoy free of charge. Sattanni is retired and looks forward to many more writing endeavors.