East Side Bridgeport – A Cityscape Made by the Great War 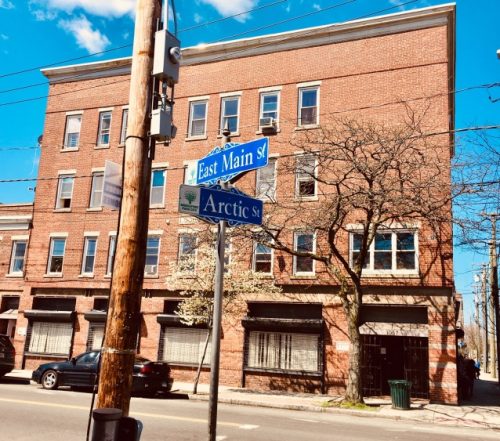 East Main Street on the corner of East Main Street and Arctic. The building was the tallest building in the area and from any window of the top floor you could look over almost the entire East Side. Skydel’s Department Store, where every Easter my mother purchased our shoes and hats, was directly across the street and I could look down on the roof. Looking down Arctic Street the tall familiar landmark of the Remington Shot Tower was visible over the tops of the houses. Looking over to the left across Boston Avenue, I could clearly see the GE meatball shining above one of the largest industrial facilities in the world. General Electric, purchased the complex in 1920 from Remington. My favorite time to view the city was on a summer evening as the lights started to come on all over the East Side. Summer time was hot on the fourth floor, and the windows were old and wooden and huge with no screens and were always open. I guess looking back if I hadn’t been careful it would have been easy to fall. I always hated looking directly down. Usually I would kneel down and put my arms on the sill and my head in my hands and I would look across to GE. My father worked second shift and as the lights came on all over the East Side I looked across to GE. It was comforting to know he was there. I didn’t understand then, but I know now, that I was looking out over a Bridgeport landscape created by the Great War.

After the turn of the century munitions manufacturing by Remington-UMC was already transforming Bridgeport. Munitions were dangerous work and a dangerous presence. There was a series of explosions that racked the plant. On May 14, 1906 an explosion of 16 tons of gunpowder in the unprotected powder magazine on Success Hill shattered “every other window” in Bridgeport. Damage was reported as far away as Long Island. Old Saybrook, CT believed it had been hit with an earthquake. Incredibly there was no loss of life. After this close call a huge munitions park of 422 acres would be reserved as a munitions testing park and remain undeveloped as a live ordnance field, called Remington Woods. It has remained so to this present day. Currently it is under threat of development as the live ammunitions and lead are cleaned from the land. 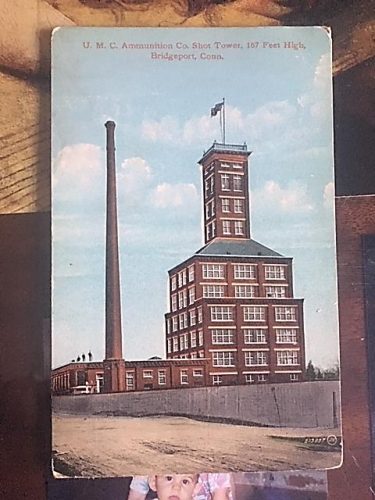 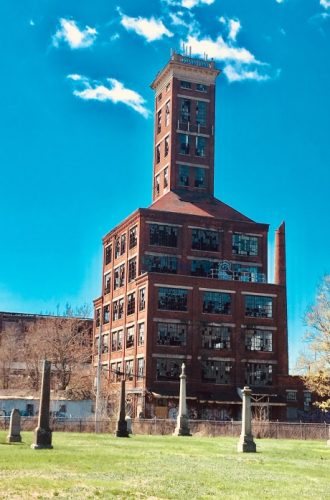 own shot. The plant needed 100 tons of shot per day and the sole source of supply was in Illinois. Building the tower commenced in 1908 and was completed seven months later by February 1909. The tower was ten stories high, one hundred ninety feet to the top of the flagpole and dominated the Bridgeport skyline. The tower was built from funds from the young owner of Remington’s private fortune. He wanted the tower to be an ornament to the city. The tower was the tallest building in Connecticut for many years and was a remarkable structure. The shot tower functioned by dropping molten lead from a height of 133 feet into vats of cold water six feet deep. The result was a perfectly spherical, uniform shot. This unique structure still looms over the East Side. Various preservation plans, as well as demolition plans, have been proposed for the structure. None of the plans have come to fruition. Ironically the shot tower windows seem to have been shot out and its derelict appearance is no longer an ornament to the city. It remains a looming, hulking remembrance of the city’s mighty industrial past.

Marcellus Hartley Dodge, the builder of the Shot Tower, inherited UMC (Union Metallic Cartridge) -Remington from his grandfather who as head of UMC-Remington had supplied arms to the nation during the Civil War. In 1915 Dodge was 34 years old and his company was now supplying arms to the warring Allied powers of Europe. When the passenger ship the Lusitania was torpedoed by the Germans in 1915 its sinking caused outrage in the US. Despite being a neutral passenger ship when it was torpedoed, Lusitania was carrying tons and tons of UMC munitions. It was the secondary explosions from those munitions that sunk the ship in less than eighteen minutes. Among the dead were 128 Americans. It was the sinking of the Lusitania that strongly motivated America’s eventual declaration of war two years later in 1917.

Just before the Lusitania disaster the Russian Czar emerged as a new customer for a million Russian rifles and one hundred million rounds of ammunition and he wanted them from UMC-Remington. Dodge was worried that entering a contract with the Russians would put him in grave financial danger, but after the sinking of the Lusitania, he took the contract and planned to build a new plant in Bridgeport. Dodge raised $15 million dollars by selling gold bonds of his company and borrowed $15 million against his own preferred stock. He also gave his personal notes for thirteen million more. Dodge was one of the richest men from the richest families in the nation. He would become one of the great philanthropists of the early 20th century. Dodge took huge risks in borrowing, and expanding his operations. His planned building in Bridgeport would transform Bridgeport’s East Side. In the 1960s the old people on the East Side would say, “the Czar built that factory.” The Czar didn’t build that plant, Dodge did, but the Czar’s Great War munitions contracts were responsible for one of the largest, most unique factory buildings in the world. To build, Dodge bought land all around the location, including the last farms in the area. He would need massive amounts of acreage for the manufacturing facilities and housing for thousands of munitions workers.. 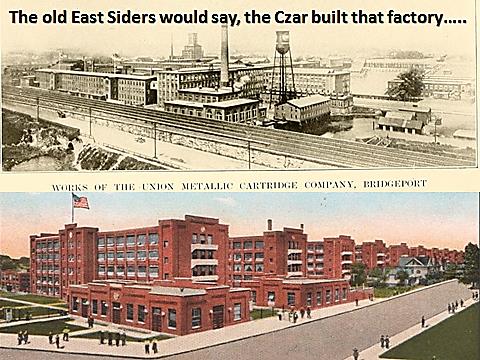 rifle plant that faced Boston Avenue. It was the largest factory that had ever been built in the United States all at one time. Its 13 parallel buildings, each five stories high were separated so that an explosion would not be able to start a chain reaction and take down the whole plant. The buildings were all linked by a central, five story corridor a half a mile long and contained 80 acres of floor space. Construction was closely guarded by the National Guard against possible sabotage by anarchists and Bolsheviks. For a time this spot overlooking old Stillman’s Pond, was one of the most important and protected places in the world.

In his 1917, History of Bridgeport and Vicinity, George Curtis Waldo. Jr., would write, “The plant today covers over eighty acres of floor space, with more being constantly added. The new arms plant, completed in the fall of 1915 is a half mile long and accommodates 9,000 employees. The ammunition plant, with its 11,000 employees also covers a large amount of ground. The Arms plant has given rise to an unprecedented growth in employees and the necessity of providing some means of quartering them. From this need has grown “Remington City” with more than 600 dwellings built by the company for housing of these people.

The density of the housing behind the plant took every available lot including the last farm on Mill Hill purchased by Remington. House after house after house went up some designed and built by the factory to house their workers. During 1915 while the plant was being built workers and immigrants flooded the city. People came to Bridgeport from all over the east coast. Housing was in short supply; the city was over crowded, and straining at the seams. According to Elsie Danenberg, who wrote “The Story of Bridgeport” in 1936, “All day long a line of men stood outside the Remington Arms Company waiting to be hired and it was said of the firm that one new man joined the force every 20 minutes. Suffice to say that 1,400-1,600 men were taken on every month for nearly a year. In November 1915, 3,000 were employed. By April 1, 1916, the number had jumped to 16,000 and 20,000 more were expected.”

Built in less than a year and completed in 1915, the facility fronting Boston Avenue was 13 inter-connected, five story buildings numbered 22-34. The plant encompassed 1.5 million square feet and 76.6 acres including a power house and was the largest manufacturing facility under one roof in the world. In 1920 the Boston Avenue plant was purchased by General Electric from Remington Arms for $7 million and served as GE’s world headquarters for decades. In 2011 General Electric sought demolition permits for the plant that had been vacant since 2008. The demolition of the plant began and famed Bridgeport pilot and photographer Morgan Kaolian documented the demolition in aerial photographs. The final section of the GE property came down on June 25, 2012. 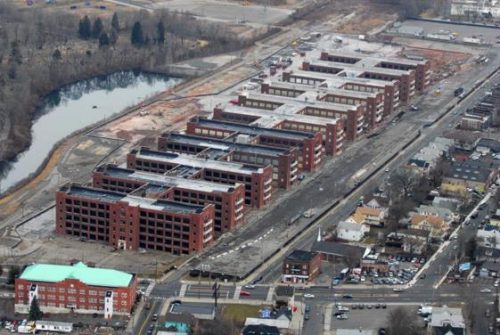 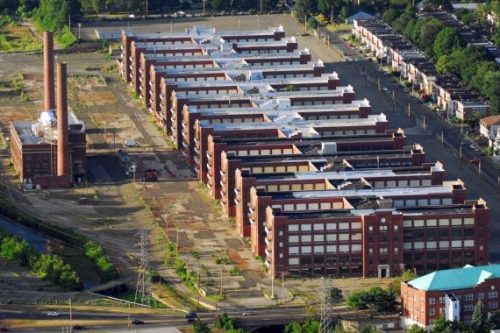 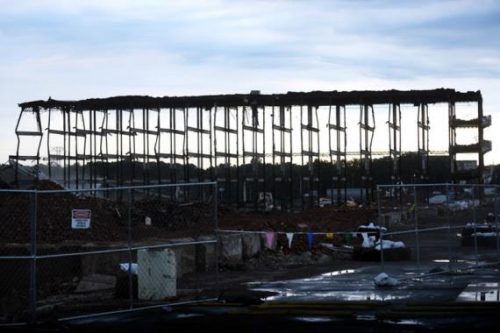 Kaolian’s photographs appeared in the Connecticut Post. Today the brownfield sight of this famous plant has been remediated and the new Harding High School sits dwarfed in the middle of the former plant location along Stillman’s pond. The new school is quite large but could fit snugly into a small part of the massive red-brick industrial complex on Boston Avenue that had been a fixture on Bridgeport’s East Side for almost 100 years. It took longer to de-construct the buildings than it did to build them in that Great War summer of 1915. Bridgeport’s Great War landscape is slowly eroding and vanishing like the great industries that created it. Many of the great brick and mortar landmarks are simply gone. 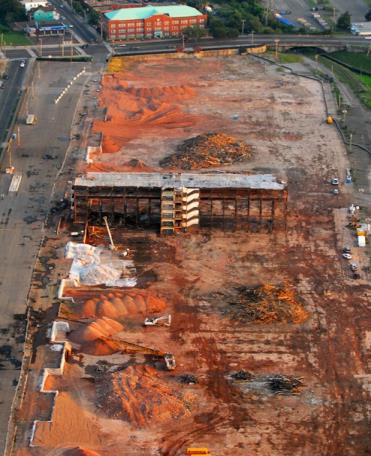 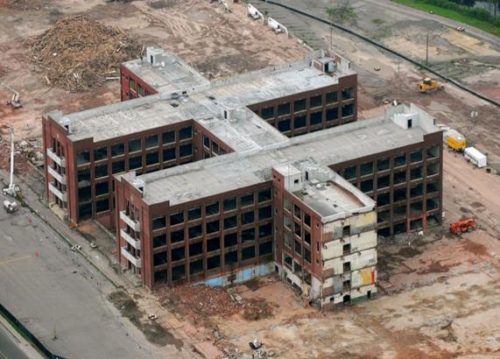 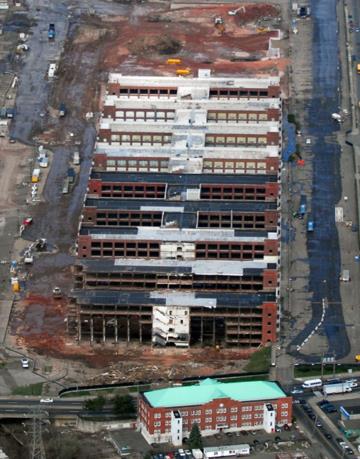