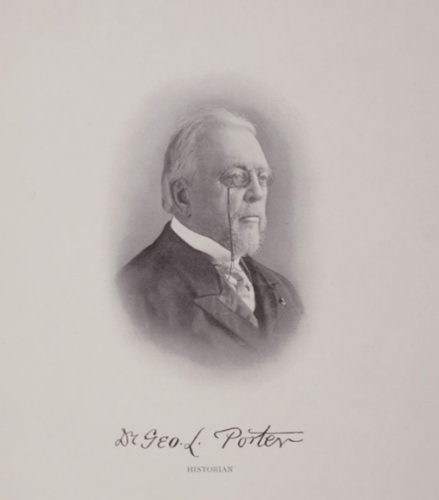 In 1936 the City of Bridgeport celebrated its Centennial.  As a lasting memento of that celebration, Elsie Nicholas Dannenberg authored The Story of Bridgeport.  According to the Centennial Committee the volume was to “perpetuate in a fitting manner the history of the founding, growth, and prosperity of our city…(and) to entertain and inform its readers.”   In the volume on the page devoted to Lincoln and Civil War, Dannenberg made a brief, intriguing reference to a then well-known Bridgeport physician, “Incidentally, Dr. George Loring Porter of Bridgeport was the only commissioned officer present at the disposal of the body of Booth.”

George Loring Porter was born in Concord N. H. in 1838.  With Civil War raging, he graduated from Jefferson Medical College in March 1862, he passed the Army Medical Examination and entered the Medical Service of the U.S. Army.  In May 1862 the young surgeon was treating the wounded when the Union Army retreated down the Shenandoah Valley.  Dr. Porter volunteered to stay behind with the wounded.  He was captured by Col. Turner Ashby.   General Stonewall Jackson placed him in charge of wounded Union prisoners and requested he care for Confederate wounded as well.  Dr. Porter’s hospital was the white columned Presbyterian church in Strasburg, Virginia where the sick and wounded were put into the pews.  Fifty-three years later the Bridgeport, Connecticut physician was invited by the parishioners to return to the hospital church.  From the pulpit he slept in as a young assistant-surgeon, he thanked the parishioners for the use of their beloved church, “for healing and saving men’s bodies.”  Porter and the Union prisoners were freed when the Confederates withdrew from Strasburg when the Union army returned.  After his release, Dr. Porter was sent to the General Hospital in Winchester, Virginia.  He served with Best’s Battery in the Battles of Cedar Mountain, Second Bull Run, South Mountain and Antietam, and tended wounded men from these battles at hospitals in Frederick, Maryland.

On November 20, 1862, Dr. Porter married 20 year old Mary Catherine Chaffee in Grace Church in Providence.  He immediately received orders to the Army of the Potomac, assigned as Assistant Surgeon of the 5th U.S. Cavalry.  His bride did not see him again until more than a year later.  For the next two years, Dr. Porter would care for the sick and wounded “with conspicuous gallantry” on the battlefields of the Civil War.  His Captain J. W. Mason wrote, “During that time the regiment was engaged in many battles losing heavily in killed and wounded.  Asst. Surgeon Porter’s faithfulness to the wounded and sick is gratefully remembered by officers and men; and his particular gallantry during the battles of Upperville, Aldie, Va., and Gettysburg, Pa., and Williamsport and Funktown, Md., and Brandy Station, Va., when he took the dead and wounded almost from the hands of the enemy, entitles him to the greatest praise and consideration.”  On his 26th birthday, after two years gallantly caring for the wounded on the terrible battlefields of the war, he was assigned as Medical Officer at the Washington Arsenal.  While the bloody battle of the Wilderness was fought and communications were cut, Dr. Porter delayed his assignment for almost two weeks as he performed surgeries and tended to casualties.  When he finally left for Washington, he took charge of the wounded going by the same route on the hospital ship he travelled on.

Dr. Porter had been Assistant Surgeon at the Washington Arsenal for almost a year when John Wilkes Booth shot President Lincoln at Ford’s Theater on April 14, 1865.  The President died the next morning while a manhunt raged for Booth and the other conspirators.  Dr. Porter and his wife and their six-month old daughter were quartered in a small house on the banks of the Potomac on the Arsenal Grounds.  On the afternoon of April 27th Dr. and Mrs. Porter went for a row on the Potomac.  When they returned home in the late afternoon they were confronted by their alarmed nanny, a freed slave who was devoted to the family and remained with the Porters for years in Washington, Providence, and Bridgeport.  The frightened woman told the Doctor some soldiers had rowed up to the wharf with a long bundle wrapped in a blanket and thrown it down on the boat house floor.  A sentry ordered her to take the baby away at once.  She told the incredulous Porters she thought it was the body of John Wilkes Booth.  The manhunt for Booth had ended on April 26.  Federal troops cornered John Wilkes Booth hiding in the Garrett barn with accomplice David Herold. Herold surrendered to the soldiers, but Booth was shot after the barn was set ablaze. A paralyzed Booth died of his wound a few hours later.  His body was taken to Washington where an autopsy was performed.  Booth was sewn into a blanket and taken to the U.S. Arsenal at Anacostia, Maryland the next day.  Doctor Porter received secret verbal orders from the Post Commander to see to the disposal of the body. The doctor chose a military storekeeper and four enlisted men to bury Booth in an unmarked grave in the penitentiary of the arsenal.  He was the only commissioned officer on the scene.  It was not until 1911 that Dr. Porter, the only living witness of Booth’s clandestine burial, revealed the facts. 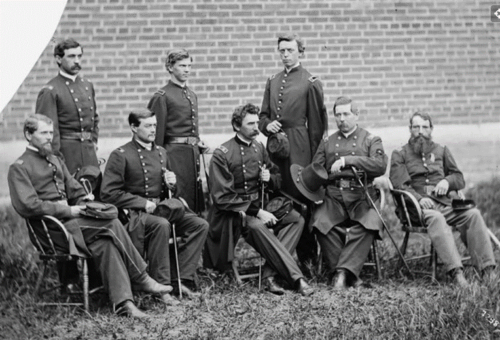 On Sunday April 30, 1865, Dr. Porter was ordered to special duty at the Penitentiary reporting to General Hartranft.  He was ordered by Secretary of War, Edwin Stanton to become the Surgeon-in-Charge of the Lincoln Conspirators.  Secretary of War Stanton ordered all the conspirators, except for Mary Surrat, in deference to her age and female sex, stiff braced with iron bars locked between their ankles and arms and “bagged” with padded canvas head coverings to prevent any form of communication.  Dr. Porter, the Surgeon in Charge, was ordered to make three examinations a day of the prisoners and report to General Hartranft.  The doctor deemed the hoods were physically and psychologically damaging.  The prisoners’ faces swelled, circulation was reduced, and their skin was raw and chaffed.  Their conditions were torturous.  Dr. Porter, through proper channels, protested these conditions.  Secretary of War Stanton delayed but finally gave in to Porter’s demands.  The conspirators went to trial and four of the conspirators, Mary Surratt, Lewis Payne, David Herold and George Atzerodt were convicted and given the death sentence.  On July 7 they were hanged in the prison yard and Dr. Porter along with Doctors Otis and Woodward pronounced them dead after making examinations.  The corpses were placed in pine boxes and interred in graves dug next to the gallows in the prison yard. Ten days later, Dr. Porter received orders to transport conspirators Dr. Mudd, Arnold, and O’Laughlin to federal imprisonment at Fort Jefferson in the Dry Tortugas.

In August 1865, Dr. Porter was breveted to the rank of Major in the United States Army for meritorious service.  In 1867 Dr. Porter’s happy existence with his growing family at the Washington Arsenal was shattered when he received orders to report to the Commanding General and the Medical Director, Department of the Dakota, for reassignment.  Dr. Porter sent his wife and sons to her parents in Providence and crossed the nation to Omaha following the same trail Lewis and Clark blazed sixty-two years before.  In Omaha he embarked by steamer to Montana.  He walked overland the last part of the trip.  Eight years before the Battle of Little Big Horn, the Doctor’s diaries were full of incidents of hostile Indians and hardship.  There was a pleasant social life at the forts, but primitive conditions, disease, and difficulties made life hard.  He tended to the sick and performed his duty.  His wife made plans to join him with the boys at Camp Cooke but fearing for their health and safety Dr. Porter resigned his commission in the summer of 1868.  He travelled overland for forty-two days to reach the Pacific to travel home by ship crossing the isthmus of Panama.  On the advice of another prominent Civil War Surgeon, Dr. Robert Hubbard, he chose Bridgeport, Connecticut as a good place to bring up his family and begin his new life of a civilian doctor and surgeon.

Throughout his long career in Bridgeport, Dr. Porter was honored as a beloved physician and surgeon, a popular man with a great sense of humor.  He was untiring in his efforts to promote the welfare of his city and state.  He was one of the founders of Bridgeport Hospital and worked with success to raise Connecticut’s educational requirements for doctors.  He loved fishing and gardening, he was a 33rd Degree Mason, a member of the Baptist Church an officer in the Connecticut National Guard, Chairman of the Fairfield County Pension Board, a Visitor to the Connecticut State Asylum for the Insane, a member of the Grand Army of the Republic and of the Loyal Legion; he was in demand for expert legal testimony.  He was a president of the Fairfield County Medical Society and president of the Connecticut Medical Society.  He was a writer and an historian and a patriotic American.  In 1911 he wrote of his experiences with the burial of Booth and the Lincoln Conspirators.  As the last living witness, he wanted to set the record straight.  His modest home on State Street was a treasure trove of letters from Lincoln, General Grant, actress Laura Keane and messages from Indian Chiefs.  He revered George Washington as a soldier, patriot, and Father of the Country.  He had more than 500 portraits of Washington.  His marriage to Catherine Maria Chaffee in 1862 was a happy one that lasted more than fifty years until she died in 1915.  They were blessed with twelve children, seven daughters and five sons.  In old age he spent winters in Florida with friends and relatives.  One obituary noted that he wore moccasins as it became increasingly difficult for him to be comfortable.  He never lost his zest for life, the sun during the day, or the stars at night.  He loved the water, and the silvery moon, and people.  His daughter-in-law remembered that during his last year he carried a slip of paper in his pocket on which he had written, “I shall grow old but never lose life’s zest, because the road’s last turn will be the best.”  On February 24th, 1919, when he was almost 81 years old, his sister and a friend came to visit him in his room in Stuart, Florida.  He rose from his chair to welcome them and resumed his seat next to his sister who put her arms around him.  He rested against her and fell asleep.  His life had been long and full, and he had made the “road’s last turn.”  A beautiful end to a noble and notable life.

The Library of Congress Prints and Photographs