For five days in the summer of 1936, Bridgeport’s Park Theatre played host to one of the most innovative and talked-about theater productions of that era: the Federal Theatre Project’s staging of Shakespeare’s Macbeth with an all-black cast, as directed by Orson Welles and produced by John Houseman. The play opened in New York City on April 14, 1936 at Harlem’s Lafayette Theatre, where it ran for ten weeks before moving to the Adelphi Theatre for two additional weeks. Advance word about the production had been so great that a reported 10,000 people gathered outside the Lafayette on opening night. Macbeth played to enthusiastic audiences, sold-out houses and mostly rave reviews during the twelve-week engagement that lasted through July 18th.

The Federal Theatre Project
The Federal Theatre Project (FTP) was one of five cultural sub-divisions of the Works Progress Administration (WPA) formed in 1935. The purpose of the FTP was to provide employment to actors, directors, playwrights, stagehands and all others involved in theater who had experienced a severe downturn in opportunities with the advent of the Great Depression. A second and equally important goal was to fund Broadway-quality plays, comic acts, children’s theater and similar performances in areas of the country where local theater and cultural groups were struggling or non-existent.

Orson Welles
Orson Welles (1) was just 20 years old when he went to work on developing his idea of a version of Macbeth for the FTP with the story shifted from 11th century Scotland to 19th century Haiti and featuring an all-black cast. The precocious Welles had been acting on stage in Europe, on Broadway and in repertory throughout the United States since 1931. He met John Houseman, (2) who was in charge of the FTP’s Negro Theatre Unit in New York, and the two worked collaboratively on Macbeth as well as on other projects in the years that followed. (3)

There were conflicts at first between Welles and some cast members who were skeptical of his interpretation of the play as well as his youth and directorial inexperience. Welles soon won most everyone over, however, because of his skills and insights as well as because he was so dedicated that he often worked literally around the clock. Canada Lee (4), who today is probably the best-known actor from the cast and who in 1936 was in the early years of a distinguished stage, screen and radio career that lasted until his premature death in 1952, later raved about Welles, going so far as crediting Welles with making him a real actor. (5)

Jack Carter, Edna Thomas and Canada Lee
A few of the actors in the huge cast (6) were well-known at the time while many were relative newcomers. Jack Carter, who was in the original Broadway production of Porgy in 1927, played Macbeth during the New York run. He left when the show went on the road and Maurice Ellis played the role in the five performances in Bridgeport. Ellis had played MacDuff throughout the 12 weeks in New York. Edna Thomas, who was living in the Sandy Hook section of Newtown at the time, played Lady Macbeth. Thomas had also been in Porgy and she later appeared in both the original Broadway and movie versions of A Steetcar Named Desire. Canada Lee, meanwhile, played Banquo.

In addition to the performances, the production featured striking visual and audio features that captivated audiences and critics alike. The costumes, sets and lighting in particular were much-praised, and the music that was important to establishing the mood of certain scenes featured the well-known drummer Austin Dafora Horton. The witchcraft that plays a prominent role in the play as written by Shakespeare was replaced by voodoo, giving rise to the production commonly being called Voodoo Macbeth.

Five Performances at the Park Theatre in Bridgeport
After success in New York and in keeping with the Federal Theatre Project’s mission, Macbeth went on the road to eight cities a few days after the final New York performance (7). Bridgeport was the first stop and the play was done at the Park Theatre located on downtown Main Street between State Street and what is now Cesar Batalla Way approximately where the Aquarion water company offices are today. There were evening performances Tuesday through Friday, July 21-24, and a matinee on Saturday the 25th. Tickets were priced at 50 cents, 40 cents and 25 cents and were available on a walk-up basis only. Newspaper accounts indicate that the Park Theatre was filled nearly to capacity for all five performances. 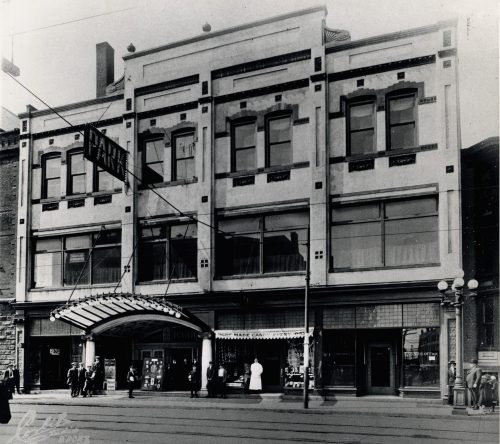 Reception by the Bridgeport Public and the Press
The full-house audiences in Bridgeport were apparently overwhelmed by the play. Writing in “The Passing Show,” a column in the Bridgeport Post dedicated to the arts and entertainment, Humphrey Doulens noted that there were six curtain calls at the conclusion of the show on July 22nd. He praised Maurice Ellis and raved about Edna Thomas’s “superb performance as Lady Macbeth.”(8)

Ethel Beckwith, also writing in the Bridgeport Post, was similarly impressed. “Daring, bewildering, full of new and vigorous breath,” she wrote of the play, “it gives to the eye a vision into the theater of the future.” Beckwith was not so enthusiastic about some of the additions, deletions and changes Welles made to the original. Like Doulens, she singled out Edna Thomas as “a distinctive and most impressive Lady MacBeth.” (9)
Bridgeport’s other daily newspaper, the Times-Star, also praised the production. In the first of two articles, the paper commented on the publicity surrounding the play, its successful run in New York and how it was making history. The unsigned article also referenced the sheer size of the production, noting that it required 30 stagehands, 750 props, carloads of scenery and a sizable number of costumes. (10)

A review in the Times-Star the next day, July 22nd, signed only with the initials “J.E.H.” remarked that the “costumes and settings are ultra-effective,” hailed the show as a whole as “stirring and worthy” and singled out Eric Burroughs in the role of Hecate for much praise. J.E.H. found Jack Carter’s Macbeth “too mechanical” and had a positive though more mixed assessment of Edna Thomas’s Lady Macbeth than the two Post writers. (11)
The Post also included in an unsigned column called “The Last Word” comments critical of the play in response to Beckwith’s review from one-time Washington Post society editor Stella McCord, who apparently attended a performance while in Bridgeport for a visit. In addition to Macbeth, McCord also objected to the WPA, the New Deal and the Roosevelt Administration as a whole. (12)

In a letter published several days later in the Post, Bridgeport resident L. Litwin took exception to McCord’s criticisms of the WPA. Litwin also referenced the enthusiastic crowds at the performances of Macbeth at the Park and then specifically addressed what it meant for Bridgeport to host such a production: “Those of us who never had a chance to see stage performances before, consider the revival by the government of the legitimate theater in this locality, an achievement.” (13)

On to Hartford
After two days off for travel and rest, the show opened in Hartford on July 28th for the first of five performances. The eight-city tour concluded in Syracuse on September 25th after which it returned to New York City for twelve final performances at Brooklyn’s Majestic Theatre. The conclusion of one performance, apparently one of the shows done at the Adelphi Theatre just before the production arrived in Bridgeport, was filmed and included in a 1937 WPA documentary We Work Again. The four minutes of footage can be viewed on YouTube: https://www.youtube.com/watch?v=QZLrqJka-EU.

Revivals Inspired by Welles’s Production
Productions of Macbeth that are essentially revivals of or inspired by the one performed at Bridgeport’s Park Theatre in 1936 have been done in a variety of places in the years since. The first known major revival was done by the Henry Street Settlement’s New Federal Theatre in 1977. (14)  In 2012, the National Black Arts Festival in Atlanta and Georgia Shakespeare paid tribute to Welles’s production with an all-black Macbeth. (15) The American Century Theatre revived the play the following spring (16) and visual artist Lenwood Sloan did an adaptation titled Vo-Du Macbeth in New Orleans in 2015. (17)