By Andy Piascik
Bridgeport has a long, rich history of pro, semi-pro, African-American and minor league baseball. The city has played host to barnstorming major league teams, teams from the old Negro Leagues and to visiting minor leaguers who went on to achieve baseball immortality such as Lou Gehrig. Much of this history has been documented by local grassroots historians Michael Bielawa(1) and Mike Roer(2).

The year 1947 marked two noteworthy events in the city’s baseball history: the opening of Candlelite Stadium and the return of the Bridgeport Bees. Candlelite Stadium was not so much a new ballpark as the renovation of an old one, Schwarz Field, which was owned by local businessman John Schwarz and located on River Street at North Washington Avenue. An earlier version of the Bees had played in 1941 at Newfield Park as an affiliate of the Boston (now Atlanta) Braves. That version of the Bees went under after one season largely due to the United States’ entry into the Second World War.

The driving forces behind the new Bees of 1947 and Candlelite Stadium were Bobby Sherwood and Carl Brunetto. Sherwood was a long-time Bridgeport area athlete while Brunetto was a local businessman. Brunetto’s holdings included the Candlelite Restaurant that sat immediately adjacent to the right field line of the ballpark and from which the refurbished stadium got its new name.

The 1947 Bees played in the newly-formed Colonial League and had a working agreement with the Washington Senators, who now play as the Minnesota Twins. The Colonial was designated as Class B, which meant it was four steps removed from the major leagues. The league consisted of six teams: the Bees, Stamford Pioneers, Waterbury Timers, New London Raiders, Poughkeepsie Chiefs and Port Chester Clippers. The Colonial was a quality league that featured a number of players who eventually made it to the major leagues, including two Bees, as well as long-time major league umpire Ed Sudol.

The capacity of Candlelite Stadium was between 3,000 and 4,000 and the Bees played night games during the week and Saturdays and doubleheaders on Sunday afternoons. According to the recollections of former players, road series were primarily “up and back” affairs: the Bees would travel in a group of automobiles to play in New London, say, on a Tuesday evening and return to Bridgeport after the game was over. They would go back to New London to play on Wednesday, return to Bridgeport afterwards, and do the same thing on Thursday. The one exception was Poughkeepsie, where the Bees stayed during the duration of a series at a local hotel. On Memorial Day, Independence Day and Labor Day, the Bees played doubleheaders against the team considered to be their archrivals, the Stamford Pioneers, with an afternoon game in one team’s ballpark and another game that same evening in the other team’s park. 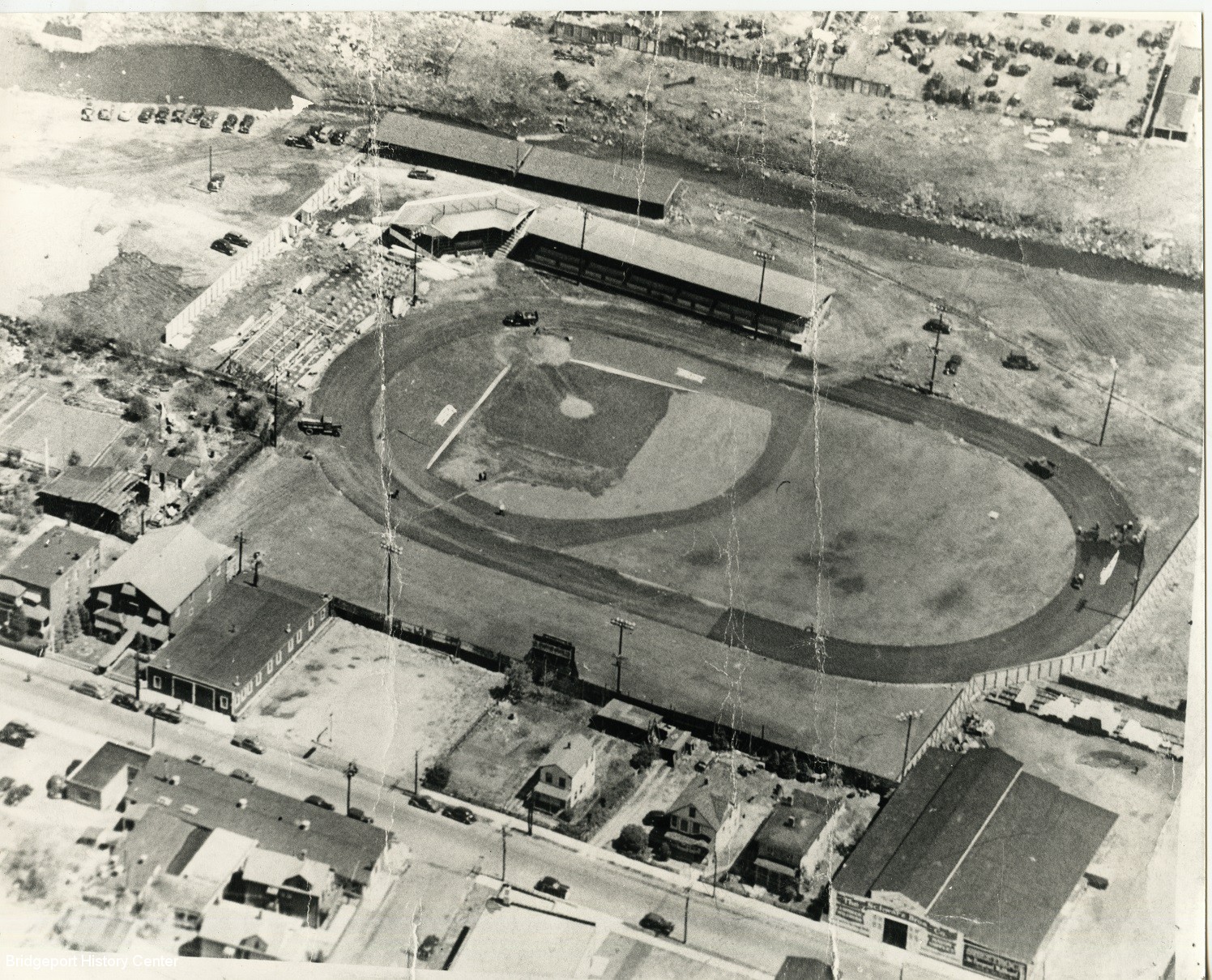 Minor league baseball is generally a precarious business and the owners of the Bees sought to generate additional income for themselves by, among other things, holding midget auto racing at Candlelite. This required that an asphalt track be laid across the outfield, which sometimes made it difficult for outfielders wearing spiked shoes designed for grass and dirt. Several players recalled that the light towers at Candlelite were too low resulting in pop-ups and fly balls that sometimes disappeared into the darkness above the lights and then returned into light as they descended.

A regular figure at Bees home games was local radio sports personality Joe Barber, who served as the public address announcer at Candlelite. Another regular was Ruth Farrell, a Bridgeport native who was the team’s official scorekeeper. Ruth began dating Bees player James Paules in 1948 and the two married the following year and remained married until Ruth’s death in 2003. (3)

One of the few promotions the Bees held in 1947 was the appearance at Candlelite of Al Schact, the Crown Prince of Baseball. Schacht was a former major leaguer pitcher who spent many years after his playing career entertaining fans at minor league ballparks, usually for thirty minutes or so between games of a doubleheader. He was an accomplished mimic and his act, together with partner Nick Altrock, consisted of comic recreations of sports events of the past as well as general physical shenanigans. The promotion succeeded as intended, as several Bees recalled that Schacht’s appearance resulted in one of the largest home crowds of the season.

Though the Bees opened the 1947 season with a victory at Candlelite, they soon sank to the bottom of the standings. New players were brought in on a regular basis in an effort to improve the team and at least forty men played for the team during the season.(4) Center fielder Bobby Sherwood and first baseman Frank Piascik, the author’s father, were the only two members of the team who played the entire season. The Bees also went through four managers as both Brunetto and Sherwood served in that post during the season. Also taking a turn at the helm was Tony DePhillips, a former major league player with the Cincinnati Reds.

Sherwood was the Bees best player, followed closely by right fielder Joe Biros and Piascik. Sherwood led the team in batting average, hits, slugging percentage and home runs, with Biros close behind, while Piascik led the way in runs batted in. Bridgeport’s Dick Welteroth went on to pitch for three years with the Senators and Joe Murray pitched in 1950 with the St. Louis Browns (now the Baltimore Orioles).

The 1947 baseball season is especially noteworthy as the first since the 19th century that blacks played in the major leagues. The Bees had no blacks in 1947 but did feature George Handy in 1948. The Stamford Pioneers, meanwhile, had six black players in 1947.(5)

The Bees did have a Cuban connection in the person of Joe Cambria, a scout for the Washington Senators. The Senators became known for scouting Cuban players and once offered a contract to Fidel Castro. At least three or four Cubans played for the Bees in 1947.

At season’s end, the Bees were in last place and out of the playoffs. The Stamford Pioneers finished third but prevailed in the playoffs to win the Presidents Cup as Colonial League champions. The Bees continued on for two and a half more seasons, always struggling  financially, until going under along with the rest of the Colonial League in 1950, done in in part by the dramatic rise of television. The large number of telecasts of New York City’s three major league teams in particular, all of which were easily available throughout the metropolitan area, made it especially difficult for the Bees and the rest of the Colonial League’s teams.

Midget auto racing continued at Candlelite Stadium for five years. In 1955, the grandstand was knocked down and two drive-in movie theaters, the Candlelite and the Pix, opened on the site. The two theaters remained in operation until 1982. For a while in the years after the theaters closed, the site was used by the Department of Motor Vehicles for emissions testing.

Special thanks to three members of the Bees for sharing their memories and insights about the 1947 season: the late Nick Pyrch; the late Dick Welteroth, one of two Bees who subsequently pitched in the major leagues; and the one and only Frank Piascik.

2. Roer, Mike: Baseball in Bridgeport: From Barnum to the Bluefish (The Academy Group, 1998). See also http://www.mikeroer.com/bridgeportsupplement.html.

3.This information is taken from James Paules’ 2010 obituary in the Connecticut Post:   http://www.legacy.com/obituaries/ctpost/obituary.aspx?pid=145407274

4. Minor league statistics and rosters from decades past are often sketchy and incomplete and so it is with the 1947 Bees. Some sources cite as many as 50 players playing during the season for the team.