When the Army Recruiter Came to Call 1862

In 1862 our nation was embroiled in a desperate Civil War.  The war was not going well for the Union. In June General McClellan was beaten back from Richmond by General Lee in the debacle of the Seven Days Battles.  The federal government needed money desperately to pay for the war and on July 1 the U.S. Congress passed “An Act to provide Internal Revenue to Support the Government and pay Interest on the Public Debt.”  This was the first federal income tax in U.S. history.  Also in July President Lincoln issued a call directly to the loyal governors of the northern states for 300,000 men needed immediately to stave off disaster as casualties mounted in both the eastern and western theaters. In addition to recruiting new regiments, the old regiments were decimated for manpower and desperately needed men to replace losses in their ranks.  Connecticut’s Governor William Buckingham loyally responded to President Lincoln’s call that “I will spare no effort to raise men.”  He issued a ringing proclamation to the men of Connecticut, “Close your manufactories and workshops—turn aside from your farms and your businesses—leave for a while your families and your homes—meet face to face the enemies of your liberties.”  All rhetoric aside the little State of Connecticut had federal manpower quotas to fill and was implementing plans for a draft should quotas not be met.  Buckingham himself would spare no expense or effort to preserve the Union.  First and foremost was the mandate to form five new Connecticut regiments.  State and Federal bounties for enlisting were offered as financial incentives to attract men quickly to the cause.  Ultimately little Connecticut would fill eight new regiments in the summer of ’62.

War meetings were held all over the state.  Celebrities, generals, businessmen, politicians and other luminaries formed committees and held patriotic rallies to induce enlistments.  Patriotic fever ran high in most cities and towns of Connecticut despite the state’s deep political divisions.  The military setbacks of June rallied patriotic fever to preserve the Union.

Army recruiters became busy all over the state.  Many of these recruiters wanted to raise companies and would become the officers in those companies. These future officers had strong incentive to enlist men under them.  They attended patriotic rallies, held meetings, and in some cases paid home visits to men eligible for military service to induce them to enlist.  With the threat of draft hanging over towns that failed to supply their quota of manpower and the state and federal bounties for enlistment being offered, many men became amenable to joining regiments of their choice, often with others from their towns and communities.  The age of enlistment was eighteen without parental permission and many young men joined with friends and relatives to enlist. 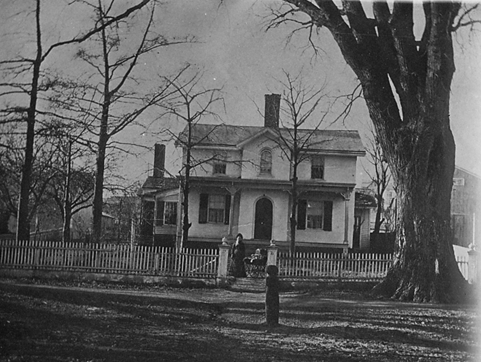 William H. Warren was just eighteen in 1862 and never forgot the recruiter who came to his home to try obtain his enlistment that summer.  After the war, Warren would record the incident in his memoirs included in the 17th Connecticut manuscript, part of the Bridgeport History Center’s collections.  The incident made a considerable impression on Warren who after the war collected letters, photographs, and diaries from his army comrades of the 17th Connecticut in hopes of writing the regimental history.  He never published that history but among the materials he gathered and recorded was this incident along with pertinent photographs.

Warren wrote: “Samuel G. Bailey, Captain of Company K, 23rd Connecticut Regiment, who came to my home, while recruiting the above company, with a squad of men, calling me out into the front yard, and gathering around me, tried their best to influence me to enlist.  My mother mistrusting what was going on, also came out, and in strong language informed them that I could not go, so that settled it, and they went away.  A few days later I enlisted in another company.”

In 1862, the hand that rocked the cradle was a powerful influence that even an army recruiter would not tangle with.  Warren’s mother had the last word that day, but not for long. Her only son, and child, would soon join the boys in blue and be off to war.  That August, William Warren enlisted as a private in Company C, comprised of Danbury men, in the 17th Connecticut Regiment known as the Fairfield County Regiment.  This regiment would become part of the 11th Corps in the Army of the Potomac.  The 17th Connecticut would see combat at Chancellorsville and Gettysburg in the Eastern Theater.  After Gettysburg the regiment would be shipped to South Carolina and see hard service in the bombardment of Ft. Sumter and the attack on Ft. Wagner.  After the fall of Ft. Wagner the Regiment would be sent to Florida for the remainder of the war where they would participate in various raids and small actions such as Welaka and Dunn’s Lake. The Regiment’s three year enlistment would end at Hilton Head, South Carolina where they were mustered out on July 19, 1865 and would return to New Haven, Connecticut on August 3, 1865 where the survivors would be disbanded.  These men would remain proud of their service for the rest of their lives.  The war was their greatest adventure.  They would remember and honor for the rest of their lives their fallen comrades who gave the last full measure so that the nation would live.

The Civil War would touch every heart and hearthstone in America.  It was a war of terrible hardship, sacrifice, and tragedy for millions of American families north and south.  William Warren was one of the survivors who would come home and resume his life.  He, like so many of his comrades, would marry in 1866 and start a family.  So very like a later generation of young American men who would return from World War II and who would be termed the Greatest Generation.   These survivors of the Civil War should be remembered as the Greatest Generation of 19th century America.  William Warren would devote his life to recording and gathering the memories and history of the men of the regiment so they would never be forgotten.  This work would engage him until the end of his life.  The tragedy of his work is it was never published.  It remains in the Bridgeport History Center as a treasure trove of primary sources of the lives of these men of the Union who gave this nation a “new birth of freedom.”  Let us hope that we the living generation can preserve the gift their sacrifices gave us and hand it on, as a good and great nation, to the generations that will follow us. 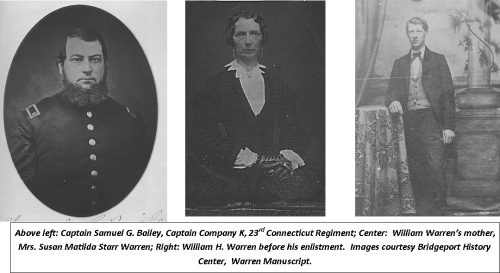