If it is true that the test of a society is how well it cares for its most vulnerable people, then Bridgeport’s health care workers can be proud of the high standard they have set. For decades they have fought for improved patient care, increased staffing levels, and respect for those on the job.

By far, the largest number of health care workers in Bridgeport-area health care are those who work in nursing homes and group home programs. Since the 1970s, these low-wage workers have organized unions to secure a decent living for their families and retirement security for themselves.
Nursing homes have often been used as a cheap way to warehouse the elderly, poor, and disabled across the country.  The Grant Street home was typical in this regard.  In 1997, the Bridgeport facility threatened to close due to financial problems caused by the owner’s failure to attract new residents.

It was the home’s workers who met throughout 1998 and contributed numerous ideas for improving patient care and attracting new residents. They recommended improving the recreation and social programs.  They urged more staff training to meet the special needs of residents with psychiatric disorders and substance abuse problems.  Even smaller steps– like cable television for the home and better parking for family visitors– were submitted to the owner. Their ideas were ignored. Grant Street continued to deteriorate.

A strike on the horizon

In October, the 150 nursing aides, cooks, laundry and maintenance workers of Grant Street joined 6,000 Connecticut nursing home workers to demand improved patient care and a living wage.  Fifty facilities were united through their union, District 1199, New England Health Care Employees Union.  As union Vice President Leslie Frane told the press at the time, “the current nursing home system has been wonderful to owners, tolerable to patients, and terrible to workers. It’s time to see what we can do to change the rules.”

District 1199 worked with many advocacy groups during its 1998-1999 campaign, including the National Citizens Coalition for Nursing Home Reform.  This organization recommended guidelines for the number of nurse staffing hours needed to provide adequate and safe care.  According to the coalition, Connecticut lagged behind the national average by six percent, and trailed significantly behind Massachusetts, New Hampshire and Maine in direct nursing care hours per day.

District 1199 had been organizing in Connecticut since the sixties, lobbying to make nursing home regulatory changes and negotiating collective bargaining agreements. The union’s most potent weapon was the ability to conduct effective strikes against the owners.  The nursing home industry– financed, regulated, and sponsored by the State– was required to submit detailed contingency plans when strike deadlines were set. The union and families knew patients would be cared for if workers walked. The real pressure would be on management. 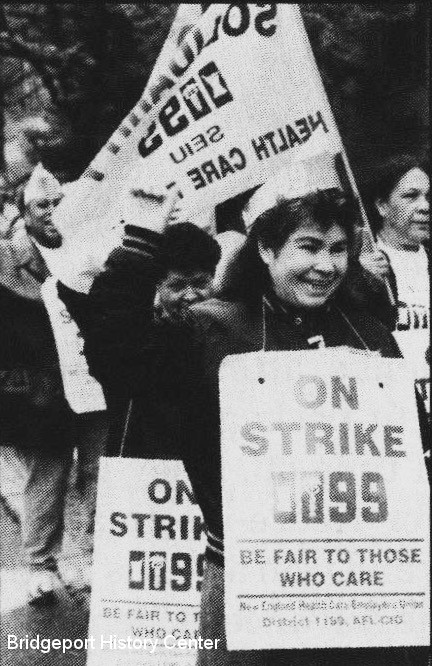 Even as the Grant Street workers prepared to strike, other District 1199 members throughout the city were fighting similar battles using that time.  Public health nurses, for example, were employed in Bridgeport’s schools, neighborhood clinics and day care centers. City Hall claimed that it could withhold a raise from nurses whose salaries were federally funded. Their union filed a grievance and won the annual increments.  The nurses also won grievances on behalf of nine-month employees to increase their employment for summer programs and year-round clinics.

State employee nurses like Debbie Remmes labored under bad conditions at the Bridgeport Correctional Center on North Avenue (District 1199 represents health care employees at all state jails).  Debbie told a legislative hearing in Hartford that care suffered due to understaffing and lack of basic supplies such as syringes, bandages and IV products.  Temporary workers saved the state money but compromised quality care, she testified.  The union’s consistent presence at the State Capitol in Hartford provided lawmakers with first-hand knowledge of how tax dollars were spent; each year union members lobbied to protect and increase services for thousands of patients.

At the Bridgeport group home agency IAIPD (Institute for the Advancement & Integration of Persons with Disabilities), unionized workers had an uphill battle with management’s financial neglect.  They had unanimously joined District 1199 in September, 1993 and voted to strike if they couldn’t secure a first contract.  An agreement was quickly reached, providing 11% raises in one year.

In 1995, these group home workers went on strike, along with five other unionized agencies.  The action ended in record time: within six hours the General  Assembly announced it would be providing $20 million to the state budget to improve group home wages and benefits.

Even with the funds won by its workers, IAIPD couldn’t balance its books. In 1999 the state Department of Mental Retardation (DMR)  abandoned IAIPD and awarded the agency’s programs to a non-union, Massachusetts company called Justice Resources Institute (JRI) .  This new operator did not last long.  Unable to make peace with their unionized employees, JRI pulled out after just two months.

District 1199 employees refused to let DMR make the same mistake twice.  They voted to strike if their programs were not taken over by a unionized agency.  All ten IAIPD programs were soon awarded to two other, more stable agencies, both of which had 1199 as their union.

Prepared to strike, and then…

As the tension mounted in Connecticut’s nursing homes, workers set a deadline of February 24, 1999 to begin their strike.  Patients and families were overwhelmingly in favor of the union’s actions, since they knew there was no other way to effect meaningful change.  “It would be wonderful if poor people in America didn’t have to scream to be heard,” said one of the workers.  “But that’s not the way it works.”

Facing the prospect of thousands of workers in the streets, Governor John Rowland reversed his “hands off” position toward the contract talks.  In a stunning turnaround, Rowland and legislative leaders increased nursing home funding by $200 million, just days before the strike deadline.

Bridgeport’s heavy industry disappeared or moved to non-union states and foreign countries in the name of profit.  With their jobs gone and their city deserted, workers turned to the service economy for employment.  Undoubtedly, that’s why many workers took low-paying, difficult jobs like those at Grant Street.

In May of 1999, contract negotiations broke down between the Grant Street owner and District 1199, despite the enormous injection of state funds that had just been given to the nursing home industry.  As part of a secret exit strategy to close its doors, the owner hoped to reverse workers’ progress and gut the union contract.

In response, Grant Street’s workforce went on strike and picketed for a week until the home agreed to honor the existing contract and resume negotiations.

State regulators put the home in receivership when it became clear the owner was abandoning the facility.  Workers won back money owed them.  Ultimately, however, it was too late for Grant Street, which eventually shut down.  Patients were moved to other nursing homes.  Workers looked to find new jobs.  They were likely to land in other facilities where standards and wages continued to be protected by their union co-workers.