Seeing What My Father Saw: the Hindenburg Over Bridgeport in 1936 – Celebrating the Bridgeport History Collections that Let Us Witness the Past

One of my father’s favorite stories about growing up on Bridgeport’s East Side was the day the Hindenburg flew over St. Mary’s School.  He remembered that the nuns let all the students out of school to view the massive aircraft.  Seeing the Hindenburg was always a vivid and unforgettable memory for him.  Perhaps it was that experience that fueled his life-long enthusiasm for airplanes and jets, although he refused his entire life to ever fly.  He was born in 1927 and a few years after seeing the Hindenburg,  when he turned 17 years old in 1944, he like many other young men during World War II, boys really, did not wait to be drafted but he joined the Navy and was sent to the Pacific Theater. 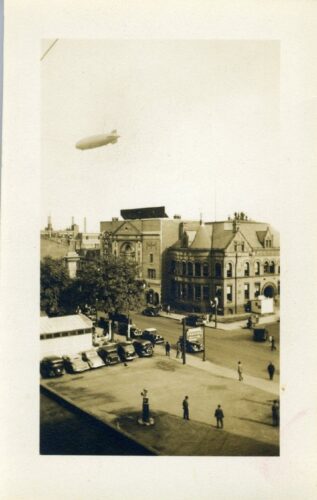 I hadn’t thought about this story for a long while until I was browsing through the Bridgeport History Center’s digital collections online.  I happened upon a photograph of a Zeppelin flying over Bridgeport.  The description on the photograph read: A Zeppelin is seen flying over downtown Bridgeport as pedestrians look up and people gathered on a rooftop take in the sight. “Times-Star” newspaper building at 928 Lafayette and trolley tracks on State Street are visible as are a parking lot and the Richfield gas station. A sign from the Cameo Theater is also visible. Photographer Griffin, Walter.

I immediately thought of my father.  He would have been nine years old when he saw the Hindenburg.  Until I saw this picture it was just another one of his childhood stories to me.  Now it was real, and I could see what he so enthusiastically described.  Curiosity ignited, I began surfing through the BHC Collections.   I found two “Bridgeport News’ articles by Mary Witkowski.  Mary is the History Center Head Emeritus.  She wrote over 400 articles for the “Bridgeport News” during her tenure at the BHC. All of her articles are available on-line from the Bridgeport History Center Collections.  These fascinating articles explore many facets of Bridgeport history, the people, the places, and things–“from the renowned to the quirky.” The Bridgeport History Center collections allow the viewer a fascinating window into Bridgeport’s past.

Mary’s first article,  It’s a bird, it’s a plane, no it’s 1936, it was the Hindenburg flying over the Park City, on February 8, 1996, explained that the Hindenburg was flying over Bridgeport in honor of the City’s Centennial, from 1836 to 1936, something I’m sure my father was unaware of.  On that October day 150,000 people, almost the entire city population, turned out to watch the Hindenburg circle over the city twice. Factory whistles blew, people shouted and clapped, the noisy atmosphere was festive as the massive silver airship floated over Bridgeport. The Hindenburg was over three football fields in length, longer than the Queen Mary, and the largest aircraft ever constructed.  It was buoyed by 7.2 million cubic feet of highly flammable hydrogen gas and traveled 84 miles per hour.  The Hindenburg could carry a cargo of 20 tons and 70 passengers in its elegant cabin which included a sophisticated dining room, a promenade deck, sleeping cabins, a bar and a piano lounge.  The piano was made of aluminum to save weight. Americans were fascinated by the ship and the Nazi’s were proud of this spectacular symbol of their prowess.  The ship was commissioned only a month after Hitler occupied the Rhineland in 1936 and the ship made ten round trips to the United States that year.    Bridgeport’s Mayor McLevy sent a radiogram to the captain of the ship that said, “Greetings from Bridgeport and many thanks and best wishes on our centennial anniversary.”  Commander of the Hindenburg, Dr. Hugo Eckener, was the most experienced zeppelin captain in the world. Eckener, a staunch anti-Nazi who had thwarted Nazi attempts to name the ship Hitler, radioed back, “…Felicitations to Bridgeport on the 100th anniversary of city.  Your industrial progress over the century brings international note to your community.  Best wishes for continued success as one of the foremost American municipalities.”  Ironically, Bridgeport was also one of the foremost American manufacturers of armaments in the world and in a few years many of the factories that blew their whistles, and the workers that turned out to cheer the huge German craft, would become crucial in manufacturing the weapons, arms, and ammunition that ultimately and heroically defeated the Nazi menace. 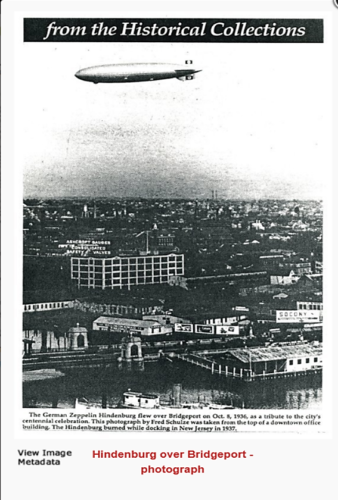 The flight of the Hindenburg over the City of Bridgeport was a thrilling sight that remained in the memories of witnesses for many years. Seven months later the ship exploded spectacularly while being moored in Lakehurst, New Jersey at 7:21 on the evening of May 6, 1937.  The disaster would end commercial air travel by zeppelin forever.  As the ship was docking on that clear spring evening in New Jersey two explosions rocked it. The highly flammable hydrogen that filled the craft mixed with oxygen combusted in seconds and engulfed the Hindenburg in a ball of fire.  Thirty-five passengers and a ground crew member were killed.  Miraculously, 62 passengers survived. 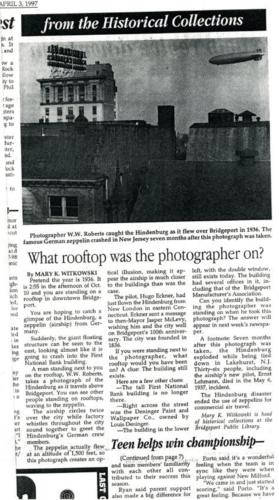 Still today there is speculation about the cause of the explosion.  Officials reported that the explosion was ignited by static electricity or other natural causes.  But was it sabotage? Some historians believe it may have been an anti-Nazi crew member who planted a bomb on the ship and triggered the combustion that immolated the largest aircraft ever built.

The fireball that incinerated the Hindenburg at Lakehurst, New Jersey in 1937, was a symbolic omen of the coming inferno of World War that would engulf the world.  Bridgeport would do its part for the war effort on the battlefields and the home front.

Many of Bridgeport’s citizens would remember forever the huge airship circling the city twice as factories throughout the city blew their whistles and children and adults looked to the sky in awe at this unforgettable sight.  The digital archives of the Bridgeport History Center preserve for all of us the memories of Bridgeport.  Through the archives we can witness the past.  Celebrate these collections.  Celebrate Bridgeport’s history and the history of our nation.  I’m more grateful than I can say for the History Center and its preservation mission.  Through these collections I am able to see in 2021 what my father saw in 1936 and to remember fondly the stories he told of growing up in Bridgeport.