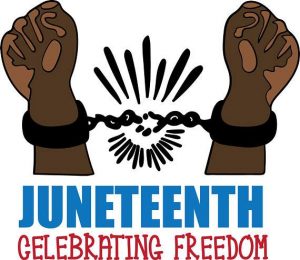 A holiday celebrated on 19 June to commemorate the emancipation of enslaved people in the US. The holiday was first celebrated in Texas, where on that date in 1865, in the aftermath of the Civil War, slaves were declared free under the terms of the 1862 Emancipation Proclamation.

WHY IS IT CALLED JUNETEENTH?

Texas was the most remote of the slave states, and the Emancipation Proclamation of January 1, 1863, was not enforced there until after the Civil War had ended. The name of the observance is a portmanteau of “June” and “nineteenth”, the date of its celebration.

WHAT ARE THE COLORS OF JUNETEENTH?

The colors red, white, and blue echo the American flag to symbolize that the enslaved people and their descendants were Americans. The star in the middle pays homage to Texas, while the bursting “new star” on the “horizon” of the red and blue fields represents a new freedom and a new people.

Juneteenth is the oldest known celebration honoring the end of slavery in the United States. On June 19, 1865, Union General Gordon Granger led thousands of federal troops to Galveston, Texas to announce that the Civil War had ended, and slaves had been freed.

9 THINGS TO KNOW ABOUT JUNETEENTH

Juneteenth is the oldest known celebration honoring the end of slavery in the United States.

On June 19, 1865, Union General Gordon Granger led thousands of federal troops to Galveston, Texas to announce that the Civil War had ended, and slaves had been freed. Approximately 250,000 Texan slaves had no idea that their freedom had been secured by the government.

However, the history of freedom in this country can be tangled, and this is no exception.

Here are nine facts about the historical moment, and what led up to it.

In August 1862, Horace Greely, the editor of the New York Tribune, published an editorial addressed to Lincoln pressuring his stance on slavery and urging him to abolish it. Lincoln responded in an open letter to Greely, published in the Tribune that same August:

“My paramount object in this struggle is to save the Union and is not either to save or destroy Slavery,” Lincoln wrote. “What I do about Slavery and the colored race, I do because I believe it helps to save this Union…”

“The end of the war, it come jus’ like that—like you snap your fingers….Hallelujah broke out….Soldiers, all of a sudden, was everywhere—comin’ in bunches, crossin’, walkin’ and ridin’. Everyone was a-singin.’ We was all walkin’ on golden clouds….Everybody went wild…We was free. Just like that we was free.”

Many continue to celebrate Juneteenth 151 years later. Throughout the nation people host cookouts, parades, and other gatherings to commemorate.