In the spring of 2018, I had the distinct pleasure of sitting down with three unique, creative, and insightful people.  These individuals inhabit all four spaces – Black, Woman, Artist, Bridgeport Native – and they do so with great pride, expression and articulation through their various art forms and discussion.  We watched a vocal interpretation of Nina Simone’s tour de force Four Women performed by Dianne Reeves, Angelique Kidjo, Lizz Wright and Nina’s daughter, Simone before the start of our discussion.  This article might have been titled Two Women.  I had to convince Wendy Bridgeforth that despite her near twenty-year hiatus from the professional art scene, she belonged in the circle.  Ina Anderson and Shanna Melton are artists whose works are established in Bridgeport, the state of Connecticut, and beyond.   Anderson and Melton share both a professional and personal relationship, having collaborated on projects, supported each other’s endeavors, and embraced one another as friends.  Bridgeforth knew of Anderson and Melton’s works, but was not acquainted with either woman.  It is my pleasure to present:

During the course of our conversation, the three expounded on topics including whether artists have a role in society, how to find the creative communities in Bridgeport, and if it is relevant and/or unique to be a Black woman artist in Bridgeport?  Another question at the table – can an artist stop being an artist?   Following are thoughts on and excerpts from the conversation:

I never saw Bridgeport as being cultural or an arts scene.  When I initially, you know, my little [inaudible], this was before all the government programs.  ‘Cause the only thing that was here in the city of Bridgeport was Parks and Recreation.  That’s when I started to explore creativity.   Right here at Newfield Park, that’s when I started to explore creativity by arts and crafts.  One of the park leaders saw that I was interested in art and, like I say, I was very naïve, and I was in a restricted household.  I mean, my mother was like this – when she said whatever, we did.  So, she never saw the worth in it.  I pursued something that I just had the strong desire that I was going to get into.  And later on I found out my favorite artists, but usually I had to sit in a room where I was the only Black person.  Which was very hard to do, and be creative.  Sometimes the teachers didn’t even know what to say to what style of work I was producing.  So, later on when the programs came in, like A.B.C.D., when they put the Art Center, when they put that program together, and they had Out Bridge [sic, referencing Youth Bridge], the drama [referencing the Drama Club], that’s when it started for me.  When the artists came through the Art Center.

STM: On responsibility and representation

I always feel like I have the obligation to tell stories of people of color through my art because we don’t get that enough.  So, there’s been this guilt about just wanting to paint a water scene.  Right?  [Laughs] Or even, maybe, a lack of interest or feeling that it’s archaic because it’s not enough.  But it is enough.  There’s this need for every day, mundane images of people of color that are not just revolution, maybe just chillin’, that is lacking.  And, I don’t know if it’s necessarily lacking, but it’s not as visible as, like, a Black Panther.  You know what I mean?  But it’s necessary because we do just sit in circles, or we do just get up and look out the window.  That doesn’t get captured.

IAA: On early impressions and expressions

In the earlier years, my mother’s sisters and brothers were Philadelphianites.  I spent a lot of time in Philly.  I have a cousin who’s now deceased, Edward Chambers, “Spanky” he was called in the industry.  Wonderful guitar player.  He had the pleasure of playing all across the country, around the world, and in different genres, and we would get together, just cut up and experiment, and just do what it was that we did.  The street that my aunt lived on, 28th Street, there were singers.  Like the Three Degrees, you know, they would come to the house and we would go down to the basement and have jam sessions.  We would end up going to Uptown Theater.  Aunt Pearl would have everybody at her house after the shows were over.  You get to just meet artists, and people.  A lot of that stuff, I think, when I was young I just kinda took it for granted that this is what people do.  Later on, I always found myself strange.  We grew up in Father Panik, but inside our house was very Southern.  The floors were always very shiny.  My mother always kept the apartment very immaculate.  We would do stuff like go out, get chickens, and pull the eggs [feathers?] from the chickens.  Just crazy stuff!  Inside the house!  But from that, music, whether it was jazz and John Coltrane, and whether it was R&B, and when funk came out, and you know, the biggest challenge I had was how am I gonna say this word in the presence of my Mom and get away with it… Probably, when I was about 17, I started writing.  We would enter into pageants and stuff, and speaking, doing spoken word was how I got to see all of the East Coast and Canada, and going out West.  Just because of being a part of the movement.  And that was always what I told, I told what I knew.  Just a rebel at all times.

Wendy, Ina and Shanna are practicing artists in the city of Bridgeport.  You might see them in production at the Klein, at the mic in one of the city’s galleries, or painting by the sea.  Each embodies in her work, and her approach to it an affirmation of the question I posed to each at the close of our discussion.  “Is there something unique or special about being a Black woman artist in Bridgeport?”  I end this article with a quote from Shanna

As an artist, I have the opportunity to offer the alternate perspective, the alternate reality – my reality.  And I’ve actually struggled a lot in the recent months with the conversation of “is advocacy as an artist sufficient or are you required on some level to be an activist at the same time?”  Because there’s a lot of people I see who are fine with just the advocacy.  But I’ve always known myself to be an activist through my art on some level.  Especially as you get older you don’t have the energy for a lot of the stuff [Laughs] because the Chronic Black Fatigue can get real.  You kinda play with the idea of “Is advocacy enough now?”  Do I make room for other people, how I make room, and then you see some ignorance blow up and you’re like “Oh, God” here I have to go.  And I know that’s how generations before me have felt.  And so there is a point where you sort of have to let go, and let the world do what it’s going to do ‘cause it’s going to do it regardless.  But I think it’s a blessing as a creative person to be able to add your voice and your perspective and what you know to the conversation.  And when we’re not here anymore, they’re going to do what they want to do with it anyway, but at least you’ve said it. 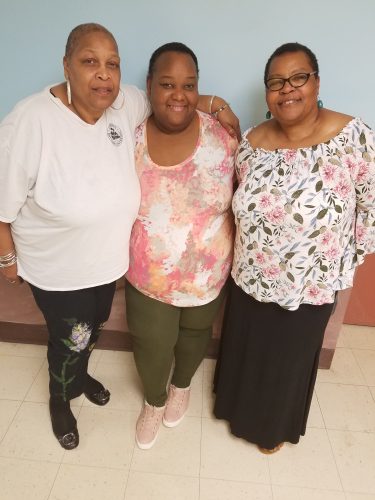 Note: Special thanks to Frankie White, Executive Director of the St. Mark’s Day Care Center for allowing us space within her facility to host the discussion.

N.B: The circle affirmed unanimously that Wendy Bridgeforth’s lifetime membership as an artist is in good standing, no matter the hiatus.

Michelle Black Smith
Michelle Black Smith is a curator, cultural historian, and divinity school student. She received her Bachelor’s Degree at Princeton University with a major in Art History, and her Master’s Degree with Honors at S.U.N.Y. Fashion Institute of Technology with a major in Museum Studies. Black Smith has either acted as guest curator or consultant to numerous museums, arts organizations and cultural and educational institutions, including but not limited to, the Smithsonian Institution, Anacostia Museum, Cooper-Hewitt National Design Museum, Motown Historical Museum, Henry Ford Museum, Jazz Museum at 18th and Vine, Black Fashion Museum, and the Bridgeport, CT Public School system. She is a lecturer at schools and libraries, and institutions of higher learning. Black Smith resides with her family in her home town of Bridgeport, where she is a co-founder of the city’s first charter elementary school.