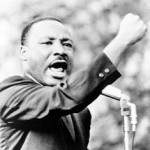 Martin Luther King Jr. was born in Atlanta, Georgia on January 15th, 1929. He was a pivotal advocate for African Americans during the Civil Rights Movement in the United States.

King experienced racism from an early age, and those events stayed with and eventually brought him to a life of activism. After graduating college with a doctorate degree in theology, King became a pastor in Alabama. He began a series of peaceful protests in the south that eventually changed many laws dealing with the equality of African Americans. King gave hundreds of moving speeches across the country, and in 1964 was awarded the Nobel Peace Prize.On April 4th, 1968, Dr. King was shot and killed while in Memphis, Tennessee. Although his life ended that day, the work that he had accomplished changed the nation. King will be remembered not only for his commitment to the cause of equality for African Americans but also for his profound speeches that moved so many.

“I look to a day when people will not be judged by the color of their skin, but by the content of their character”

“Our lives begin to end the day we become silent about things that matter.”

“Whatever your life’s work is, do it well. A man should do his job so well that the living, the dead, and the unborn could do it no better.”

“In the end, we will remember not the words of our enemies, but the silence of our friends.”

“In the end, we will remember not the words of our enemies, but the silence of our friends.”

“Life most persistent and urgent question is, What are we doing for others?”

“Lightning makes no sound until it strikes.”

“Rarely do we find men who willingly engage in hard, solid thinking. There is an almost universal quest for easy answers and half-baked solutions. Nothing pains some people more than having to think.”

“Every man must decide whether he will walk in the light of creative altruism or in the darkness of destructive selfishness.”

“The function of education is to teach one to think intensively and to think critically. Intelligence plus character – that is the goal of true education.”

“An individual has not started living until he can rise above the narrow confines of his individualistic concerns to the broader concerns of all humanity.”

“The limitation of riots, moral questions aside, is that they cannot win and their participants know it. Hence, rioting is not revolutionary but reactionary because it invites defeat. It involves an emotional catharsis, but it must be followed by a sense of futility.”

“Nonviolence is absolute commitment to the way of love. Love is not emotional bash; it is not empty sentimentalism. It is the active outpouring of one’s whole being into the being of another.”

“A man who won’t die for something is not fit to live.”

“We must accept finite disappointment, but never lose infinite hope.”

“If I cannot do great things, I can do small things in a great way.”

“We are prone to judge success by the index of our salaries or the size of our automobiles rather than by the quality of our service and relationship to mankind.”

“I refuse to accept the view that mankind is so tragically bound to the starless midnight of racism and war that the bright daybreak of peace and brotherhood can never become a reality… I believe that unarmed truth and unconditional love will have the final word.”

“It may be true that the law cannot make a man love me, but it can keep him from lynching me, and I think that’s pretty important.”

“Of all the forms of inequality, injustice in health care is the most shocking and inhumane.”

“Violence as a way of achieving racial justice is both impractical and immoral. I am not unmindful of the fact that violence often brings about momentary results. Nations have frequently won their independence in battle. But in spite of temporary victories, violence never brings permanent peace.